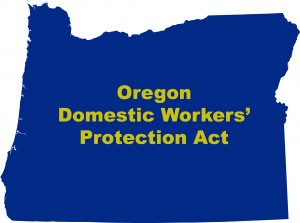 The Beaver State has joined California, Hawaii, Massachusetts, and New York in providing new protections for nannies, housekeepers, and other domestic workers. The Oregon Domestic Workers’ Bill of Rights (formally known as The Domestic Workers’ Protection Act) was signed into law on June 17th by Governor Kate Brown, and will go into effect on January 1, 2016. Household employers in Oregon should prepare to be compliant with the following new regulations:

Note: the bill does not cover home care workers for seniors and persons with disabilities; occasional babysitters; independent contractors; the employer’s parent, spouse, or child under 26 years old.

If you have any questions about how this new law will affect you as a household employer, contact GTM at (888) 432-7972.